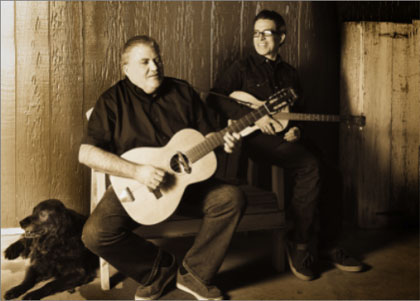 This past Sunday, I jumped on I-10 East and headed down to Tucson for a Dave & Louie show. Dave & Louie being David Hidalgo and Louie Perez, two members (and the main songwriters) of Los Lobos. The atmosphere and show format could not have been cooler: two 45 minute sets of music followed by a Q&A session – where audience members could step to the microphone and ask questions. Did I step to the mic? But of course! More on that later.

Sunday’s Tucson show was the final stop on a short seven city tour of the West, celebrating almost 40 years of writing songs together.

The Rialto Theater, a rustic, old-school theater in downtown Tucson, provided a genuine and authentic backdrop to a genuine and authentic duo. David & Louie limited themselves to songs they had written, hitting on Los Lobos material, a batch of stray songs from the late 80’s (recently released as ‘Unreleased Songs & Rare Recordings‘), and songs from their two albums as Latin Playboys (1994’s ‘Latin Playboys’ and 1999’s ‘Dose’).

The night began with the short n’ beautiful instrumental “Lil’ King of Everything”, right into”Will the Wolf Survive”. Then came their first of the 1988 tunes: “What Good Is Love”. They played seven out of the ten songs on the new CD – such a treat to hear some classic Lobos sounds that were so fresh and new to me. In particular, the beautiful, plaintive ballad “Take My Hand”, which David sang alone on stage. Preceding it was another nice song, sung solo by Louie. I couldn’t nail down the title (UPDATE: “Tony y Maria”), but it was a beautiful ballad about an immigrant that crossed the border to settle in Los Angeles, leaving his wife behind in Mexico (the first line something like “It’s 150 miles from Los Angeles to Mexico”).

It was a David and Louie show, but that didn’t mean they were alone. Joining them on stage for a good number of the songs were drummer & percussionist Cougar Estrada (also in Los Lobos), as well as David’s son Vincent Hidalgo, who played bass on a few of the tracks. The full band numbers were a treat: “How Much Can I Do?”, a Hidalgo accordion-driven stomper from the first Lobos album; the Latin-jazzed up “Teresa” (which can be found on Ickmix 3); Colossal Head‘s “Mas Y Mas”, including scorching electric from Hidalgo; and especially cool was the finale: “Forever Night Shade Mary”, a Latin Playboys tune (with sort of a Rat Pack coolness to it) that appeared on their first album and the Desperado soundtrack. It had everyone snapping their fingers and humming their way out to the lobby, where we waited for David and Louie to sign some things and chat with the fans. Did I buy their new CD and have them sign it? Absolutely! Was I rockin’ the Runaway Bride googly eyes? Almost!

Here’s me and David… 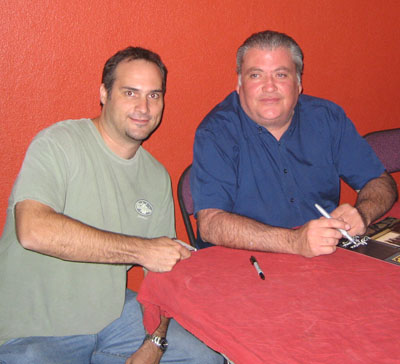 So the coolest feature – and a rare treat for the crowd – was the intimate Q&A session that David & Louie conducted after the second set. An anchorwoman from L.A. – a self-proclaimed Los Lobos groupie – emceed the Q&A. There was a microphone set up in front of the stage, and any person who wanted to ask a question only had to wait in line for the mic. I wasn’t about to pass up this opportunity.

So what did I ask? Well, first a little background. Last week, Stereogum posted part of a Jambase interview with Lobos sax-man Steve Berlin. In the interview, Berlin is asked about Paul Simon’s ‘Graceland’ sessions. Los Lobos joined Simon in the studio during the recording of ‘Graceland’. Simon was apparently quite liberal about taking Los Lobos’s music, writing a song over it (“Myth of the Fingerprints”), and releasing the album without giving any credit to Los Lobos. Berlin is quite opinionated in the interview, even calling Simon the “world’s biggest prick”. So why not get David & Louie’s perspectives on the sessions? Here’s how it went….

Pete: I didn’t know until recently of your involvement with Paul Simon’s ‘Graceland’. I read a Jambase interview with Steve Berlin from about four years ago – I just read it this past week – and found it real interesting because one of Steve’s quotes is that Paul Simon is the “world’s biggest prick”…

David Hidalgo: No, he’s only about this tall [measures with his hand about four feet off the ground] *laughter*

Pete: ..and that’s kind of where I’m going with this question! He doesn’t remember the sessions too fondly because I guess you guys got there, you sat down, and there really were no ideas for songs – so you guys started jamming on what later became “Myth of the Fingerprints”. I guess when the album came out you guys didn’t get credit for songwriting or music – I don’t know if the album has been modified to have that or anything, but what are your memories of those sessions and do you think Paul Simon is world’s biggest prick?

Louie Perez: Do you really want us to rag on him?

Pete: Sort of. *laughter* No, not really, I just wanted your feelings of the sessions…

Louie: I think he’s a great songwriter, I always enjoyed his songwriting. That’s why we got together with him. That’s business, you know – it’s just kind of unfortunate that he…looked at us as some kind of anthropology…like a study or something.

David:… like “You guys go in the studio, you play, and I’ll capture the moment, and I’ll write a song over it.”

Louie: …and then goes home and writes a song over it. But that wasn’t the first time. He did that with “El Condor Pasa“. There’s a group called Los Incas in South America that plays indigenous folk music. And he did the same thing. They took a traditional song…

David: “El Condor Pasa”, that’s the one right? “I’d rather be a [hums a little] muppetera”.

Louie: …he wrote a song over it…. but no, nothing’s been modified – I don’t know why all of a sudden it came back, someone else asked me about that recently – I guess I forgot about it.

Pete: There’s a music blog called Stereogum that posted about it last week – it’s read by a lot of people.

David: And I hate his little boots. *laughter*

To wrap it all up, I’d rank this right up there as one of the most memorable live music experiences in my life. The intimate show followed by personal interaction with their fans made this a very special night for me. The more I listen to the music of David Hidalgo and Louie Perez, whether it’s with Los Lobos or Latin Playboys or whatever, the more I appreciate and enjoy it. Like I say in my sidebar blurb, my music tastes are all over the map, and the great thing about David & Louie’s music is that their tastes are too. They hit you with roots rock, blues, latin jazz, traditional Mexican / tex-mex / norteño, 50’s style early rock n’ roll – you name it, they play it. They share my appreciation for all music. I don’t think anyone should limit themselves as a music listener. Those who do are missing out on SO MUCH it’s sickening.

This was the last show on this little mini tour – but they hinted that there’s more coming. By all means, go check David Hidalgo & Louie Perez out if they come to your town – in whatever form they’re playing! 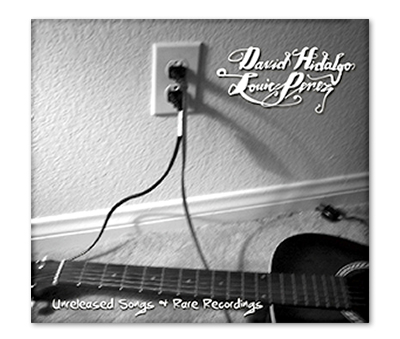 First Set:
Lil’ King of Everything >
Will the Wolf Survive?
What Good Is Love
A Matter of Time
Big August Moon
Saint Behind the Glass
When Love Fails
How Much Can I Do?
If