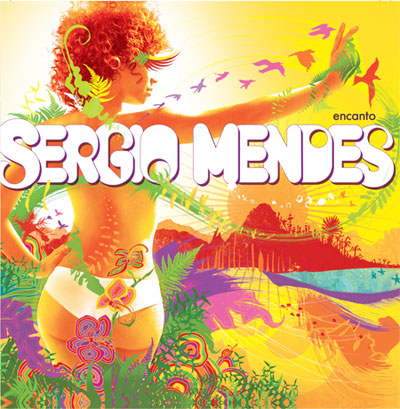 I can’t claim to know much about Brazilian music legend Sergio Mendes, beside the fact that I love this song from his 1992 album Brasileiro…

Mendes has been active in the music industry since 1961, when he formed the Sexteto Bossa Rio. In 1965, he moved to New York City, and a year later formed Brasil ’66, which hit platinum with its debut, Sergio Mendes and Brasil ’66 – featuring “Mas Que Nada”.

Fast forward to Tuesday, June 10th, when Mendes will release his latest, Encanto (nice cover up there, eh?). Along for the ride are Latin sensation Juanes, Natalie Cole, Ledisi, Herb Alpert, and the ever-ubiquitous will.i.am, who recommended his buddy Fergie to sing on the will-produced track, “The Look of Love” – a Burt Bacharach track that Mendes originally recorded with Brasil ’66 in the late sixties.

Now, it’s up to you to decide whether will and Fergie enhance the song, or poison it. My personal opinion: I think they’re starting to wear out their welcome; like they’ve hit their peak. But that’s one opinion. Here it is:

Another tune from the new album: