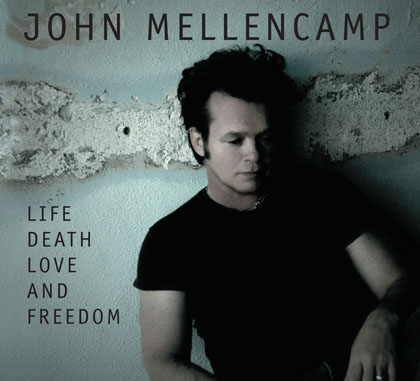 My opinion: if you throw T-Bone Burnett into a project, you’re going to get favorable results. Look at some of the production credits in his resumé:

Los Lobos – How WIll the Wolf Survive?
Wallflowers – Bringing Down the Horse
Counting Crows – August and Everything After
BoDeans – Love & Hope & Sex & Dreams
Elvis Costello – King of America
Robert Plant & Alison Kraus – Raising Sand
Bruce Cockburn – Nothing But a Burning Light and Dart to the Heart
The Soundtrack to O Brother Where Art Thou

And oh so much more.

One new album bearing the stamp of T-Bone is John Mellencamp‘s Life, Death, Love and Freedom, due out July 15th on the Hear Music / Starbucks label. I have a ton of John’s older stuff, but haven’t really heard much of the stuff he’s put out over the last 10 years or so. And regardless of what John says about “My Country”, the over saturation from the Chevy commercials turned me off to the song immediately.

But this tune has me looking forward to the new album. Mellencamp calls it a collection of “modern electric folk songs”. He also credits Burnett with “finding the soul of each song”. I give Mellencamp credit for hooking up with Burnett – I look forward to hearing the results. They’re off to a great start with this one…