I have a love/hate relationship with my city: I love to hate it and I hate to love it. One of the things I do love about this place is that, on occasion, Cincinnati can produce some pretty amazing musicians. Like one of my current favorite bands, Pomegranates. 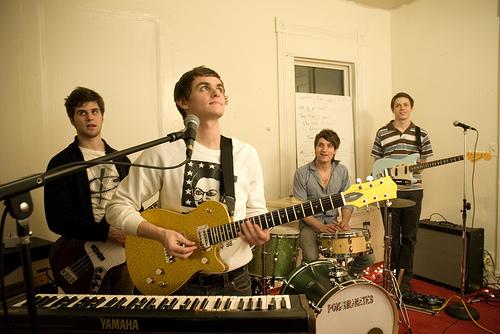 Even though these guys are local, and play out a fair amount, I hadn’t managed to catch them live until earlier this summer when they opened for Ra Ra Riot (also amazing) at The Gypsy Hut here in Cincinnati. My first thought during their set was, “these boys are adorable!” I don’t know if that’s necessarily the image they’re going for, but it’s the truth.

Adorableness aside, they are charismatic, talented performers and have put out some incredible music. Reviews I’ve read have compared them to early Modest Mouse and Death Cab for Cutie (two bands I’ve been over for a long time, so I find that kind of funny). I was completely blown away by them and when I learned that they were one of the openers for Margot & The Nuclear So and So’s a couple of weeks ago, that was enough to get me to haul my lazy ass down to that show, despite the fact that no one would go with me (Margot was good, too).

You can find pretty much everything you might want to know about them on their MySpace, their blog or on their label’s site (incidentally, they are labelmates with two of my favorite Chicago bands, Baby Teeth and All City Affairs). They are touring quite a bit this month, including dates with Ra Ra Riot, French Kicks, Headlights and stops at the Monolith Festival and the Midpoint Music Festival (which I have to miss because I’ll be at a conference for work…grrr!), so you should check them out if they’re coming to a city near you. Besides recommending you buy their stuff, I also suggest you download their woxy.com Lounge Acts (they have two).

Pomegranates – We Could’ve Escaped, But No One Was Interested (mp3)

Garcia and Grisman - Sitting in Limbo