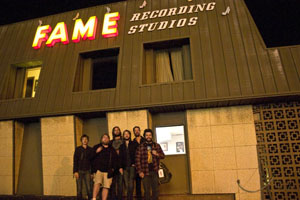 I can easily say that for me, Band of Horses has had the fastest trajectory from off-the-radar status to obsessive, can’t-get-enough status of any band in a long, long time. And they’re just getting started, with only two studio albums to date.

A couple weeks ago, the boys made the pilgrimage to Muscle Shoals, Alabama, a legendary town in the music recording spectrum. They have holed up at Fame Recording Studios to record their third album.

Keep up with the band on their blog. They just updated it with some great pics from Saturday’s Bridge School Benefit concert.

Fame studios has hosted the likes of Duane Allman, Otis Redding, Wilson Pickett, Aretha Franklin, and a bunch of others. Hell, even the Backstreet Boys, Liza Minnelli and the Osmonds have recorded there.

Here’s a legendary track that came out of Fame Studios…