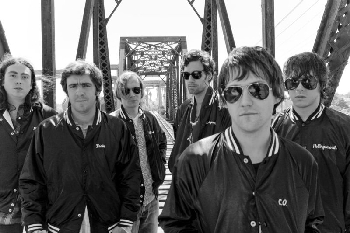 Thanks to a last minute ticket offer (gotta love Twitter), I headed out to see Conor Oberst & the Mystic Valley Band last night at the Marquee Theater in Tempe. They played the ACL Festival last September, but I missed ’em there. I’ve been an admirer of Conor’s since I heard the Bright Eyes album ‘I’m Wide Awake, It’s Morning‘. Brilliant record. Conor’s self-titled solo debut last year is also top notch, “Sausalito” being my favorite.

With the venue located in the heart of Arizona State University, the college set was out in full force. I was one of the old folks in the crowd, and I’m only 38. Props to the older 50 something who was accompanying his teenage daughter. I’ll be doing the same down the road. I love seeing that.

Conor, his new wide-brimmed black bolero hat, and the band strolled out at around 9:20pm, and launched into a track called “Spoiled” from the MVB’s forthcoming album, ‘Outer South‘. The 90 minutes of music focused exclusively on music from that album, and from Conor’s record.

I was back by the soundboard, and my only complaint of the evening was the occasional muddiness in the mix in some of the louder full band songs – especially “Sausalito”. An exception though was a tune that the lead guitarist sang about a half hour into the show. It was a short, sweet blast of rock n roll – sort of like when Keith Richards steps to the mic for one of his uptempo tunes. I was taken aback. I’ll be keeping an eye out for this tune on the new record. I tried to get some lyrics down, but pretty much failed. All I got was “I still get…” and “with you”. That helps, huh?

What surprised me too was hearing the Conor songs live, and the way it breathed new life into them. “Eagle on a Pole” was explosive and spirited; “Get Well Cards” and “Moab” were also great.

The true magic for me though came when things slowed down, namely in the opening and closing songs of the encore. The first song of the encore was just Conor and his acoustic, singing “White Shoes” (from the new MVB album). It was just gorgeous, centered around the chorus: “Anything you wanna do. Lover, anything you wanna do.” Intimate and intense. You can hear it right here.

The closer of the evening was “Milk Thistle”, which also closes Conor’s record. Apparently I hadn’t taken the time to focus on this song when listening to the album, because the lyrics blew me away…

I was really impressed by Oberst and the band. Conor couldn’t have been more genuine and personable in his interaction with the 700 or so people in the crowd. He seemed to be in a great mood, and the crowd fed off that, enjoying every song, even the new unfamiliar ones.

Except for those few who felt like chatting away during “White Shoes”. I am not fond of people like you.

There was a problem with the comments...