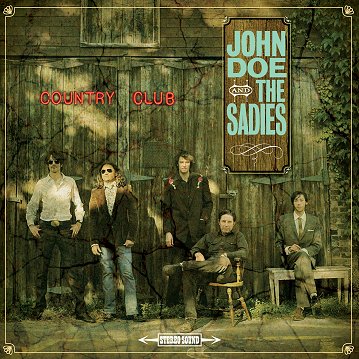 When I was looking through this week’s releases, this one jumped out of the screen at me: John Doe and the Sadies. Now, I’m pretty clueless when it comes to the music of X, and its co-founder Doe. But I know the reputation of X as one of the seminal bands of the L.A. punk scene. The Sadies are a Canadian band that specialize in that rootsy, twang-filled sound that I enjoy so much. So seeing that these two entities collaborated had me visualizing some sort of country sound with a kick – maybe something in the vein of Old 97’s or Reverend Horton Heat. Twang with a Bang…

But it was apparent a few songs in that this was not that kind of album at all. What you’re getting instead is a classic, old school country sound. Most of the tunes are covers of some country classics: Johnny Cash’s “I Still Miss Someone”; “A Fool Such As I” (made popular by Elvis); Kris Kristofferson’s “Help Me Make It Through the Night”; and Merle Haggard’s “Are the Good Times Really Over For Good”, among others. There’s also a few originals, including some nice instrumentals composed by the Sadies in there.

If you’re into classic, “real” Country music (not the homogenized “New Country” that Nashville is pooping out these days), you’ll enjoy this album. If you drive a big rig cross country for a living, this’ll make good company. If the lights are low, you’ve got a six-pack of Pabst Blue Ribbon and a broken heart, throw on track 11, “Take These Chains From My Heart”, and call it a night.

While the album lacked the punch I was expecting, it’s clear that John Doe is a huge admirer of these songs, and he adds something fresh and new to every one of ’em. With a tight band like Sadies backing him up, what you have is a solid album that’ll feed those twang pangs when they come around.