First Avenue was packed Tuesday night April 28th as the lads from Glasgow took the stage. Franz Ferdinand has always been a real pleasure to see live. I had only seen them one other time–at the Fine Line in 2004–on their first tour of the US. In addition to putting on a high energy show back then, I got to hang out with several burly local Scots who were wearing kilts…the way you are supposed to wear them:) 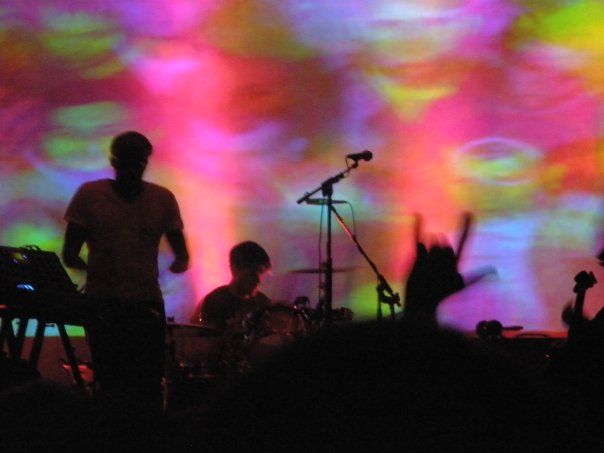 Alex, Nick, Bob, and Paul opened up their set last Tuesday with “Jacqueline,” a slow ballad that shifts into high energy about one quarter of the way through. Immediately, we all knew we were in a for a visual treat as the immense video screens kicked on in the back and proceeded to bombard us with high def images of such beauty and wonderment that I must admit I got a some late evening wood.

As they went from song to song, the visuals changed…sometimes showing band members…other times showing certain images that reflected both the theme and the style of the song. This was not simply tech geeks getting off with their new Mac. This was ART. And it was not spoon fed to us.

They played songs from all three of their albums focusing primarily on their new record “Tonight” which has several great tunes. “No You Girls,” “Ulysses,” and “Turn it On” were all played and sounded magnificent. Of course, old chestnuts like “Tell Her Tonight” and “Michael” torqued up the crowd…the frenzy of which was reached when we all shouted take me out during….”Take Me Out.”

The encore contained a track called “Lucid Dreams” which brought even more stunning visuals on the back drop and propelled all of us into the year 1967 as the chaps summoned the spirit of Syd Barrett to downtown Minneapolis. I remarked to my friends in attendance with me that I never would’ve pegged Franz as going down the psychedelic road, but they did–and in their own femmy dork style.

They closed with “This Fire” and sent all out into the night to burn our city down–metaphorically of course. I know that I did and in the process have become a different man.

For the next two weeks they will be playing dates out east. Check their web site for more information.