Thanks Gonzo for this week’s Ick’s Pick!  – Pete 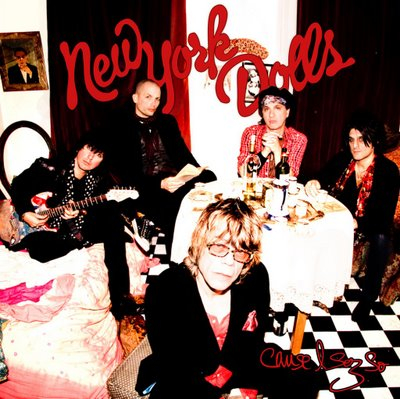 In 1973, the New York Dolls released their now-classic debut album, produced by Todd Rundgren. 36 years and one reunion album later (2006’s One Day it Will Please Us to Remember Even This), the 21st century incarnation of the Dolls reunite with Rundgren for ‘Cause I Sez So, their 4th studio album.

I admit that I was a little concerned upon hearing about this release. While One Day… was one of my picks for 2006, my initial thought was that the band might be pushing it by doing another album, Rundgren or not. But I’m pleased to report that the album laid some of these fears to rest.

Perhaps the strongest cut is the opening title track, which captures the classic, straightforward Dolls-style rock. Frankly, this is probably my vote for the album’s strongest cut.

Cause I Sez So – New York Dolls

While “‘Cause I Sez So” most successfully captures the Dolls’ classic sound, other tracks (“Muddy Bones,” “Nobody Got No Business,” “Exorcism of Despair”) fit into that strain as well. There’s also the slinky blues of “This is Ridiculous,” the trash talk response “Better than You,” the southern- (almost Latin-) tinged “Temptation to Exist,” the foreboding darkness of “Drowning” and the mid tempo tracks “Making Rain” and “Lonely so Long.”

Another track of interest is a re-recording of perhaps my favorite Dolls song (and one of their most canonical), “Trash,” from their 1973 debut. I generally am not a fan of this practice. I understand artists’ desire to revise or reinterpret their material, but I generally feel like this should be restricted to the stage or to b-sides. While Bowie has faltered on these rerecordings a few times (“Space Oddity” in the early 1980s, “Rebel Rebel” circa 2004), the revised “Trash” is actually somewhat interesting, if still unnecessary. Gone is the thud of the punk drumming style and the crunchy guitars, traded in for a low-key reggae-ish rendition. Imagine the Clash covering this song circa Sandanista!, make it slightly more laid back, and you’ll approximate the Dolls’ 2009 version of “Trash.” Certainly not an improvement or an equal to the original, but an admittedly refreshing take.

And that may be what makes ‘Cause I Sez So interesting – it’s stylistically more varied than their previous effort, and their classic albums for that matter. That’s not to say that it surpasses or quite meets their first two LPs, but it shows them making an effort to tread into different (although certainly related) territory. Artistic growth is something that I generally appreciate, and that makes this album attractive, even though I find it less immediately pleasing than One Day…. However, the new disc does give me the feeling that it will grow on me over the next few weeks, and may be in heavy rotation this summer.

In the end, the new Dolls disc is far from an embarrassment. While one can rightly contest such a classic band retaining the New York Dolls moniker when only two of its original members remain, Johannsen and Sylvain are doing their legacy justice in the 21st century, and we should be thankful that the Dolls are still with us, despite the fact that some of them are not.

‘Cause I Sez So releases TODAY, Cinco de Mayo.

Buy ‘Cause I Sez So

All You Gods and Goddesses: Bloc Party @ First Avenue