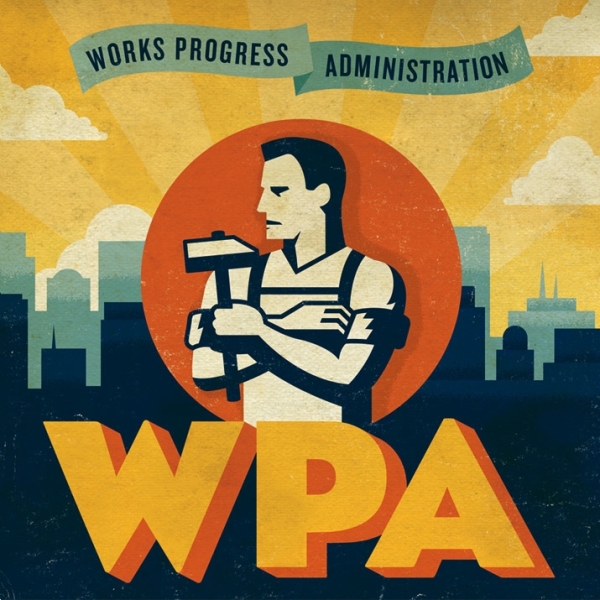 Glen Phillips’ brand of Southern California folk-rock has always flirted on the edge of its bluegrass and country and western roots. In the years since Toad the Wet Sprocket closed up shop, his songwriting has danced closer and closer to those roots, and with 2000’s Mutual Admiration Society – pairing Phillips with members of Nickel Creek – it seemed to come to the forefront. Taking that collaborative spirit to the next level, Works Progress Administration consists of Phillips and his MAS cohorts Sean and Sara Watkins (Nickel Creek, Fiction Family) with Luke Bulla (Jerry Douglas Band, Lyle Lovett), Benmont Tench (Tom Petty and the Heartbreakers), Greg Leisz (Joni Mitchell, Bill Frisell), Pete Thomas and Davey Faragher (Elvis Costello and the Imposters).

The group’s debut record, WPA, is a slice of modern Americana with strong pop sensibilities. Recorded over the course of five days, the recording itself feels very alive and immediate thanks to the production of Jim Scott (Wilco, Tom Petty). There is a dynamic that showcases the collective beautifully and shines a light on the real star of the show: the 12 well crafted songs that make up the album.

”Always Have My Love” is easily one of the strongest tunes that Phillips has written in the past 10 years. It’s followed by the equally stellar “Good as Ever”, with Sara Watkins providing her angelic voice to bolster Glen’s vocal. Sara takes the lead for the gut-wrenching cover of Ray Davies’ “I Go to Sleep”.  As strong as these songs are, “I Could End This Now” (mp3) is easily my favorite track of the bunch. It manages to take the bluegrass mélange and adds just a touch of soul resulting in a stormy mid-tempo ballad.

WPA is not without its faults. The rave-up of “Paralyzed” and the hoedown of “Wedding or a Wake” seem awkward by comparison to the rest of the material. The record’s lowest moments come at the plodding “Who’s Gonna Cry for You” and “Remember Well”. Despite these small missteps, this record is a must for fans of the group’s respective origins.