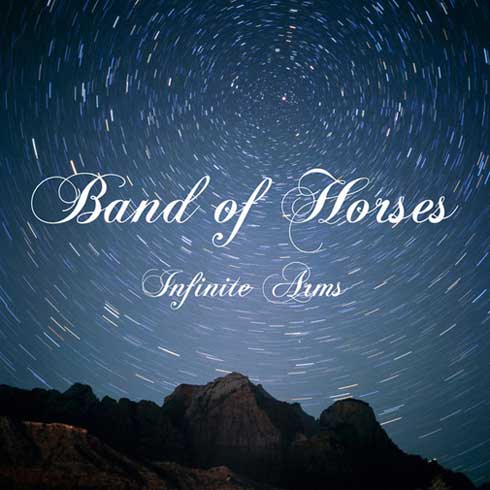 Exactly two years have passed since I became enamored with Band of Horses (the cool thing about having a music blog is the ability to track your evolution as a music geek). It really clicked when I picked up Cease to Begin, then watched this in-store performance at Amoeba Records in Hollywood. Beautiful melodies & harmonies soaked in a classic, southern, indie rock vibe – the focal point being front man Ben Bridwell and his Voice from the Heavens.

In the 24 months since, I have devoured their two albums, seen them play in Austin, and signed on as a lifelong fan. So obviously, I was good n’ ready for the release of their third album, Infinite Arms, on May 18th.

Over the last month, BoH debuted the first three tracks of the record – “Factory”, “Compliments” and “Laredo” – on their web site. Great tunes, and it’s fun to get a sneak peek, but as hard as it is to do, I wish the band would’ve held their cards until release day so I could be hearing the entire album for the first time. Of course, no one forced me to listen to the early released tracks – but come on, what’s a guy gonna do – ignore them for 3-4 weeks?

But I’ve listened enough times now that these first three tunes now seem more woven into the fabric of the album than separate entities, like they first felt. Don’t worry, I’m in a good place now.

“Factory” leads off the record, features strings, and a great opening line: “The elevator in the hotel lobby has a lazy door.” This is one of the “growers” for me – one of those songs you’re not crazy about initially, but grow on you the more you listen. There’s a definite sadness to the song. Ben Bridwell’s lyrics center around a man who has left his lady, and is shacking up in a hotel…

It’s temporary, this place I’m in
I permanently won’t do this again
My belongings scattered across the hotel floor

And any thoughts of a happy ending and a return home are squashed with this last part:

Well I feel awful, and I believe
Time gets wasted in this misery
And darling I never wanna come back home

“Compliments” is another song that reaches into deeper and darker territory. “If there’s a God up in the air / someone looking over everyone / at least you’ve got something to fall back on… I bet you get a lot of compliments down there”. Can’t figure out if Ben’s writing about a dame who turned to the dark side. But this also ain’t no love song – that’s for damn sure.

“Laredo” seems the most familiar of the bunch, which makes sense, being so similar to “Weed Party” – same rhythm, very similar riffs and chord structure. And I have no problem with that.. a spirited, get out on the road vibe. And still, another about escapism – and from what I’m gathering, about putting an end to it all.  There’s talk of kitchen knives, bullets, and getting thrown in the deep part of the lake. Shit, maybe he shouldn’t take a trip to Laredo…

“Blue Beard”. Beautiful. I’m a sucker for Ben’s voice when things slow down and his multi-tracked voice shines – and this is the first moment of the record when this happens. The first few seconds will remind you Indie-minded folks of Fleet Foxes (though every choral-type harmony these days seems to draw comparisons to FF by default). Oh yeah, there’s an underlying sadness to this one too.

The midwestern sky is gray and cold
The sun never shines but that’s alright
And I couldn’t find the letters you wrote me too
What did you write? Where’d you go?
Well I don’t know.

“On My Way Back Home” is another beauty, starting slow and picking up tempo. Ben’s voice starts in an even higher register than normal. If I was put in charge of sequencing this album (and I’m sure I’ll have my day), this would’ve served admirably as the album closer.

“Infinite Arms” starts softly with acoustic guitars and chirping birds. Pondering life’s questions, man’s mortality, and returning to the refrain: “When my thoughts drift to you”. This line stuck out to me. Simple, poignant, intense. Really cool imagery here, and so open to interpretation:

I love the morning
I like to listen
to 4am birdies begging to feed
Now there’s something here before me
a figure i think
Isn’t there a warning?
Something to drink?
My God
My God

When my thoughts drift to you

Hmm, the “figure” there before him. The grim reaper maybe? This is how it ends?

“Dilly” has a fun little groove to it. Ben co-wrote it with guitarist Tyler Ramsey. Again, open to interpretation. Take the chorus: “”It really took a tall one to see it / two to believe it / three to just get in the way”. At a loss really to what it means, but I’m going to enjoy repeat listens and try to figure it out. “Dilly” may be the most pop-oriented of the bunch.

“Evening Kitchen” is a quiet one – acoustic guitar & vocals – written and sung by Tyler Ramsey. Ben and keyboard man Ryan Monroe add harmonies. Interesting tune. Outside of the harmonies from Ben, it’s a departure from the BoH sound.

“Older”, ahh “Older”. The band played this song when I stood feet away from the stage at their 2008 ACL Festival set. I even captured some amateur vid. LOVE this song. Ryan Monroe sings the lead (he wrote the song) and plays the B3 –  and Ben kills on the harmony.  An amazing song, and I’m happy to see it on this record.

“For Annabelle”, another co-writing credit with Ben and Tyler, features Tyler’s great acoustic guitar work, the churn of Ryan’s B3, and some great harmonies with the boys.

“NW Apt.” – I was reading a review of the record on Songs by Toad, and a commenter called this song a “blatant Grandaddy ripoff.” I love me some Grandaddy, and he’s right about the similarity – it could easily be Jason Lytle singing this song.

“Neighbor” channels the spirits of Bartles and Jaymes (those fellas still around?), referencing them in the chorus. It’s hard for me not to think back to the album closers of their previous two records: the songs “St. Augustine” and “Windows Blues” – the latter song arguably my favorite BoH song of them all – gentle, sublime and damn near perfect. So while “Neighbor” is a good enough tune, it doesn’t wrap up the album like the other two songs close their respective albums.

All in all, the album is seeping into my pores with each listen. I’ll admit I bought this disk on Tuesday with some pretty high expectations. Everything All The Time and Cease to Begin were an amazing one-two punch, and I was instantly drawn to songs like “Monsters”, “Marry Song”, “I Go To The Barn Because I Like The”, “Part One”, and of course “Windows Blues” (huh, those are the slower ones, go figure). So maybe I was seeking out that same experience with this record – expecting to be promptly bowled over by some of the songs.

The dynamics, however, have changed. The supporting cast surrounding Ben is different, and it’s more of a collaborative effort, with Tyler Ramsey and Ryan Monroe contributing songs, and the band self-producing a lot of the record (along with original producer Phil Ek). If you mix up the formula, your results will be different.

The mainstay through it all, though, and frankly the heart and soul of this band, is Ben Bridwell. His voice is one I’ll be enjoying for the rest of my life, thank you very much. And it’s his presence that makes Band of Horses something very special, and Infinite Arms a solid record overall – one that will continue to evolve along with the rest of us.

Check out the Official Web Site of Band of Horses.

Band of Horses: Laredo on Letterman

The Wig He Made Her Wear