I discovered the treasure trove that is the music of John Prine back in the early 90’s, during my last year of college. The Missing Years

about knocked me on my butt, with its witty wordplay, catchy cadences, and gorgeous melodies. The album led me directly to Great Days: The John Prine Anthology, which gave me a crash course in this American treasure, the postman turned folk singer from Maywood, Illinois. 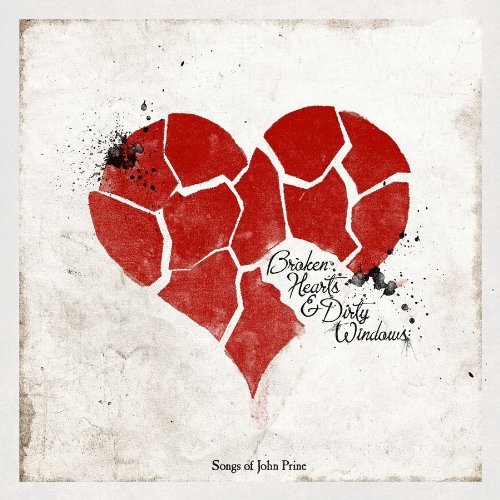 In reading the liner notes of the new tribute album, Broken Hearts &Dirty Windows – Songs of John Prine, I found out that Justin Vernon (of Bon Iver) had the same experience – growing up in Wisconsin and happening across the Anthology; getting to know John Prine through classics like “Sam Stone”, “Paradise”, “That’s The Way That The World Goes Round”, and “Hello In There.”

With the release of this fantastic new tribute album, it’s clear that Prine has had a similar impact on a host of younger artists – and it’s interesting that the artists on this record rank among some of my current favorites: Conor Oberst, My Morning Jacket, Old Crow Medicine Show, Deer Tick, Drive-By Truckers… it makes sense now: we’re all rooted in Prine’s music, and as they’ve matured and made music of their own, its these same roots that have pulled me into their music.

The standouts for me on this record include Deer Tick’s “Unwed Fathers”, featuring the sandpaper vocals of John McCauley and the sweet accompaniment of Liz Isenberg; Josh Ritter does “Mexican Home” from 1973’s Sweet Revenge

“My father died on the porch outside
On an August afternoon
I sipped bourbon and cried
With a friend by the light of the moon
So its hurry! hurry! Step right up
It’s a matter of life or death
The sun is going down
And the moon is just holding its breath.

Drive-By Truckers do their thing, taking The Missing Year‘s “Daddy’s Little Pumpkin” and shifting it into overdrive; My Morning Jacket also do a Missing Years tune, “All The Best”, which Jim James and Prine recently performed on Letterman (worth a look); the Avett Brothers pick what I think is the perfect song for them: “Spanish Pipedream”; and Old Crow Medicine Show take the beautiful “Angel from Montgomery” and add their old timey flavor to it.

The big surprise for me was the album’s finale – “Let’s Talk Dirty in Hawaiian” as performed by Those Darlins, a female trio from Murfreesboro, Tennessee. First off, it’s one of Prine’s most hilarious songs, the innuendos flying left & right. And then you add a sexy rhythm, an island feel, and the sensual and sassy singing of Those Darlins. Play this at a BBQ this summer, it’ll be a guaranteed hit. It’s such a fun ride, and a fitting finale to what amounts to a great tribute to good ol’ John Prine.