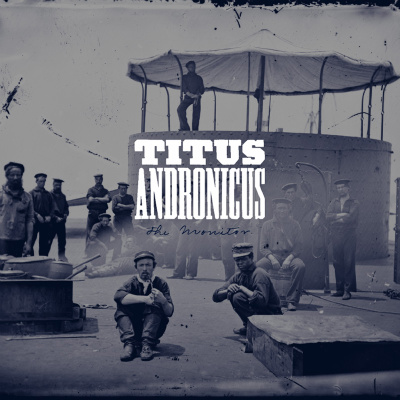 Once in a while, a song comes along, lifts me up by the collar and slams me up against the wall. I had one of those moments with “A More Perfect Union”, the opener on the The Monitor, the latest record by New Jersey’s Titus Andronicus. The album/song start with a spoken word excerpt from an 1838 speech given by Abraham Lincoln – and when the guitars & drums crash in powerfully after the words “If destruction be our lot, we ourselves be its author and finisher. As a nation of freemen, we will live forever, or die by suicide”, it’s off to the races.

The band clearly comes from the same school of raw, raucous power as the Clash, Bruce Springsteen, the Pogues, and the like. And singer Patrick Stickles has an irreverent, raging vocal delivery that reminds me of Conor Oberst – and I like Conor a lot when he’s pissed off.

The official video of “A More Perfect Union” skips the opening Lincoln intro, which is a shame, because it’s an integral piece of kicking the song into overdrive – from zero to sixty in a second. But you’ll get the vibe.

The Monitor comes highly recommended. Buy it for $5

on Amazon. I did. If you’re with me here in Arizona, I’ll see you April 18th for their show at the Rhythm Room.