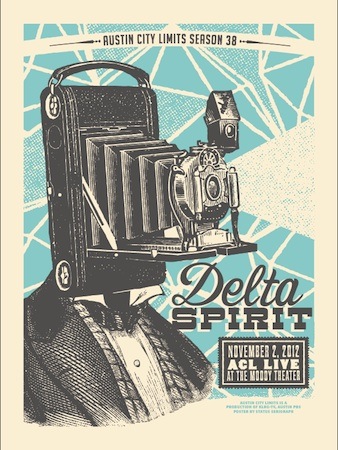 Austin City Limits is amazing week in and week out as it is, but when one of my favorites hits the stage for the 30 minute showcase, it always seems to capture something special that gives me a brand new appreciation for the music and the artists I admire (one previous example: John Prine’s 2006 appearance when he introduced me to Blaze Foley’s “Clay Pigeons.”

This weekend’s premier episode with Delta Spirit and Bob Mould brought that same type of moment for me when Matt Vasquez (of Delta Spirit) introduced and sang the song “Vivian.” Matt wrote the song about his grandparents Vivian and Jerry. It’s written from Jerry’s perspective after he’s passed away. He’s up in Heaven and plaintively lamenting the loneliness of it without Vivian. With each chorus, he’s moving closer and closer to her. He moves from “above the clouds” to “below the clouds” to “above your house” and finally, to “beside your bed.” It’s such a moving and heartfelt declaration of love – “not separate even in death.”

I’ve heard and enjoyed the song many times on DS’s History From Below, but seeing it introduced and performed this way, with Matt’s parents in the ACL audience, in the town that he grew up.. well, it hits me in that sensitive sweet spot (where music so often does).

Some moments propel me to this chair & keyboard to share with like-minded music-loving folks. This is one of those moments.

From History From Below

Their Flag is Planted Deeply in the Ground