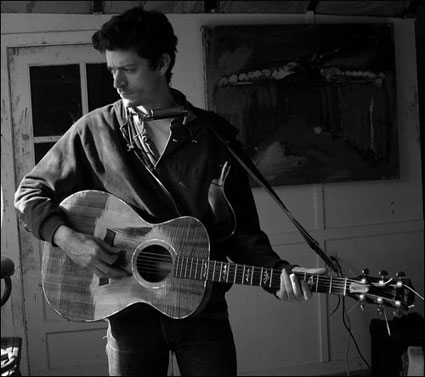 Gorgeous effing tune right here. I’ve listened to this song about 100 times in the last couple of weeks. I picked up A.A. Bondy‘s American Hearts album in preparation for the Austin City Limits Music Festival. He was set to play at 11:30am on Sunday morning. And play he did. I guess. I didn’t make it. I was slowly coming back to life at the hotel. The previous day/night had involved many large $8 cans of Heineken at ACL, and a few Dos Equis back at Shakespeare’s Pub on 6th Street {and a block away, Band of Horses was playing their surprise benefit gig at the Parish. Ah cruel fate).

So this is a great record. A roots-blues vibe, and Bondy’s voice is one of a kind. He’s certainly influenced by Dylan (more apparent on the rest of the album). He’s also the brother-in-law of the Felice Brothers, another group sort of in the same vein.

Me, I’m a sucker for the love songs, especially when they delve into fatalistic scenarios like:

Austin City Limits and a Band of Horses