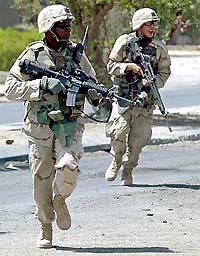 I don’t mention the politics and events of the day too much, but I must say, like most people, the war in Iraq makes me sick to my stomach, and I believe we were misled into it by the war-mongers surrounding our misinformed bozo of a President. Believe me, I want to, as an American, be able to be proud of and stand behind our president, but when it comes to Iraq (and other policies of this administration), he’s lost me.

I see no justification for the deaths, maiming, and permanent psychological damage to the brave troops put in harm’s way. It is sickening, profoundly sad, and completely unnecessary. To those who argue that this stance is “unpatriotic” or not in support of our troops, you’re wrong. How could you support the troops more than wanting them to come home alive from a living nightmare? Lives are being destroyed as our prez “the decider” and his puppetmasters joke it up at the black tie Republican fundraisers. And the Democrats are no better. There should be accountability, and there should be outrage. Meanwhile we Americans drive around in our gas guzzling Hummers and sit glued to our televisions, casting more votes for American Idol than for any presidential election ever. Oblivious.

From the Clash to Carbon/Silicon