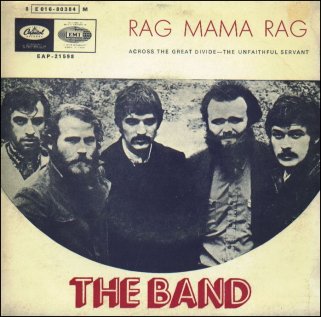 For those curious to hear the Seeger Sessions take on The Band’s “Rag Mama Rag”, look no further! Bruce debuted it May 30th in Columbus, Ohio. I also heard it in Phoenix on Saturday night, and to be totally honest, I wasn’t that blown away by it. It was enjoyable, but I think it paled in comparison to “Ramrod”, which preceded it, and had the whole joint going crazy. But still very cool to see and hear Bruce pull out these gems along the tour.

The song, written by Robbie Robertson, originally came out on the Band’s second album, ‘The Band’, in 1969. All Music has this song review:

One of the most popular songs in the Band’s catalog, “Rag Mama Rag” is a wonderful, swinging song with some of the Band’s most perfect playing (which is saying something) and great, funny, almost nonsensical lyrics. The success of this song, unusually on The Band, is not due to Robbie Robertson’s lyrics but to the music. Garth Hudson creates an amazingly intricate rolling piano line, while bassist Rick Danko plays a wonderfully country-influenced fiddle, weaving in and out of Levon Helm’s always subtle drumming. Indeed, singer Helm believed the song could have been a hit single, arguing that it “swung like ‘Blue Suede Shoes’.” Although it was not a hit, and is not one of the deepest songs in the Band’s repertoire, it is enormous fun, and the group played it regularly in concert throughout the 1970s. The song received a reverential cover version from Little Feat, although there are no other major recordings of the song.