June 7th marks the big 4-8 for Prince. Let’s listen to some guitar work, shall we? It seems like Prince always surprises people when he tears it up on the guitar. Remember the Rock n Roll Hall of Fame ceremony a few years back? Prince came out to solo on the all-star performance of “While My Guitar Gently Weeps”, and stole the show. I remember Tom Petty looking over in amazement. SNL’s “Fury” performance a few months back is another example. I guess people forget about his talent on the guitar, and need to be reminded every now and then.

‘The Undertaker’ definitely showcases his guitar skills. According to Wikipedia, “Prince originally intended to give this live CD away free with 1,000 copies of Guitar Player Magazine in 1994, but he was told by Warner Brothers Records that he couldn’t. Some rare copies were leaked and heavily bootlegged.” Whether this is true or not, who knows. But it never found its way on to store shelves (to my knowledge). So take a listen to a few of these live tracks… the ten minute blues jam that is “The Ride”, the driving rock guitar of “Bambi” (originally released on 1979’s ‘Prince’), and the bass-driven dark funk of “The Undertaker” (with some killer guitar effects, and a blistering solo six minutes in).

Now go make the birthday boy happy and visit his web site to snatch up all the music you don’t have. 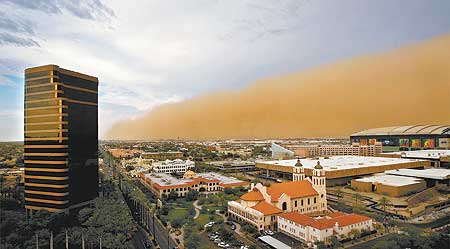 I have to pass along a photo of the Great Haboob of 6-6-06. Living in the Arizona desert, we miss a lot of the weather phenomena you see in other parts of the world (earthquakes, hurricanes, tornadoes, etc.). But haboobs? Oh we’ve got your haboobs. A haboob is basically a very tall wall of dust that crawls along the desert floor, reducing visibility, coating everything in dirt. It’s usually followed up by a little rain, but not last night (at least where I was). Yeah, we get a little excited about weather around here.