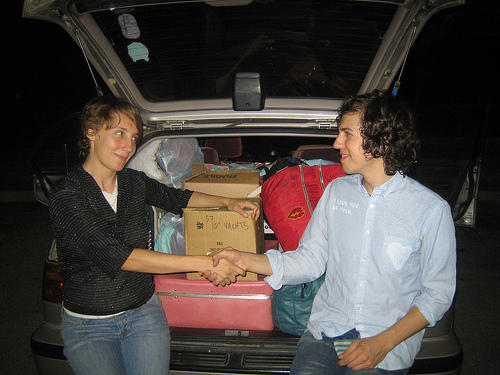 PC or Mac? As my Dell PC (c. 2004) began to slow down a bit, and the 80 gig hard drive neared its capacity, it was time to start the search for my new computer. For once, it was a calculated decision, quite unlike the impulse trips to Best Buy “for a quick look”, only to walk out with a new PC 45 minutes later. This upcoming computer will be my fourth since 1997, not too bad in computer years I guess.

So this time around, I’ve decided to jump across the great divide and go with a Mac for the first time. An iMac, to be precise. 20 inch screen. 500 gig hard drive. A gig of memory. It should be shipping tomorrow. The anticipation builds… a new era! My wife said she’s way more excited about the steam cleanin’ vacuum that’s on its way from Costco. I – I just don’t get that.

So thanks to my friend Jim for being the answer man for all my Mac vs. PC questions. I’m pretty pumped about this if you can’t tell already. Thing is, I haven’t found a Mac owner who hasn’t raved about them. And they’re just – so – damn – cool! Sleek, slick, simple.

So on to some music. The Blow is the brainchild of Portland, Oregon based performance artist Khaela Maricich and Jona Bechtolt. Artsy fartsy indie rockin’ performance artists – with a good beat. And the kids can dance to it.

My Dwight Masterpiece: If There Was a Way