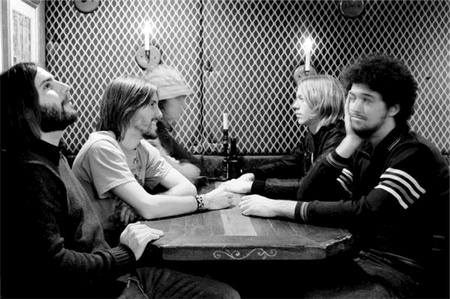 As a married pops of two living in the sticks outside of Phoenix, my days of spending five out of every seven nights bar-hopping and band-watching have come to an end. So my knowledge of the local music scene is pretty much limited to the local press and the occasional night out.

Today, a columnist for the Phoenix New Times posted about a cool local band on his blog. The title of his piece is ‘Annals of Bad Band Names’, and he has a valid point in this case: the band’s name is What Laura Says Thinks and Feels. They may have a good story behind the name, so I won’t judge. And after hearing these tunes, I was willing to overlook the silly name, because this stuff is infectious… a retro feel but completely unique at the same time. Folky, trippy, Brit-poppy, Brian Wilson-y.

Add your -y’s in the comments.

The New Times post has another tune you can listen to.

Their MySpace has three other tunes, including a nice soft one called “Dot Dot Dot” (reminds me of Kings of Convenience). And of course it’s excellent karma to support an unsigned band, so go to their CD Baby page and pick up their album. Or get it on iTunes. After listening to these songs, I think a lot of you will.