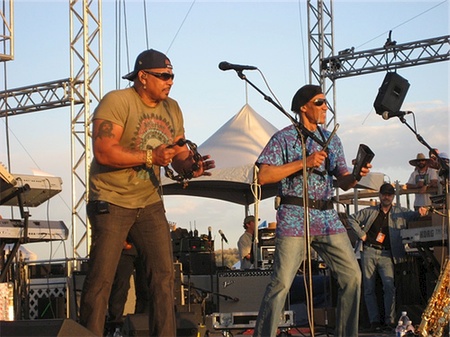 I had the good fortune to see the Neville Brothers a couple of weekends ago here in Arizona. That same weekend, Jazz Fest was kicking off in New Orleans. The Neville Brothers were once staples of the Jazz Fest scene, but this was the second consecutive year that they were no-shows. Some have attributed it to Aaron Neville’s asthma. He allegedly says that the climate aggravates it.

Today, Hidden Track passed along a link on the Time-Picayune site regarding the Funky Meters return to New Orleans (Art Neville, the eldest brother, is a member of both the Meters and the Neville Brothers). The article also mentions the continued absence of the Neville Brothers in New Orleans. The criticism catches fire in the comments section. Some of the residents of New Orleans apparently harbor some serious resentment toward the Nevilles, accusing Art of bashing post-Katrina New Orleans, and going as far as calling them traitors and exploiters of their home town.

I don’t know the guys personally, but I find it hard to believe that the Nevilles have anything but love for their home town of New Orleans. Aaron just buried his wife of 50 years there in January, for crying out loud. On this their thirtieth anniversary, I’m sure the Nevilles will be planning a triumphant return to the Big Easy.

But it was interesting to see any negativity directed toward the Nevilles, especially from their home town folks. I would think their lifetime of devotion and dedication to the city would set that issue straight.

So let’s go back to last summer’s Vienna Jazz Festival, and take in a great sounding set by the Brothers.