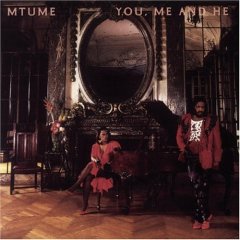 James Mtume actually started out as percussionist for Miles Davis in the early 70’s. By the early 80’s he had formed his own group, Mtume. He hit #1 on the R&B charts in 1983 with “Juicy Fruit”. His follow up a year later was You, Me and He. The title track went all the way to #2. It’s a slow, burning jam about the cheatin’ side of love. Tawatha Agee and Mtume trade off on the vocals. Sizzling! Simmering! An 80’s R&B classic! Now, where’s my Freddie Jackson tape….

Buy You, Me and He

A nudge in the right direction