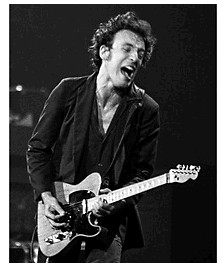 Bruce’s new tune, “Radio Nowhere” leaked yesterday. It’s a straight-ahead rocker. One of my Boss Forum posters said it’s reminiscent of “867-5309” as performed by Pearl Jam [Edit: Tommy Tutone’s song as Pearl Jam would perform it – that wasn’t clear the first time around]. It’s true, you can definitely hear a tinge of it in the tune. Good stuff! You can check it out over at the Hype Machine.

box set, then you’ve heard quite a bit of part two. Six of these songs appear on the box set in edited form (Adam, Paradise, Growin’ Up, Saint, Backstreets, and Rosalita), which goes to show what an amazing show this truly is. The box set doesn’t include Bruce’s comments before “Paradise by the C”. Here, you’ll hear Bruce kick off the song with: “All you bootleggers out there in radio land, roll your tapes!”…

The very next night, Bruce and the band headed over to my neck of the woods to play Veteran’s Memorial Coliseum in Phoenix. The video footage of “Rosalita” that made its way on to the Video Anthology DVD

was taken from that night.