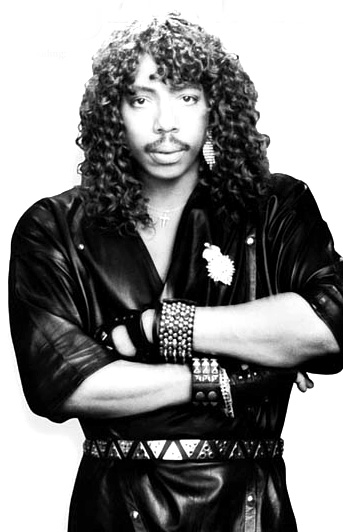 When Rick James died unexpectedly on August 6th, 2004, he was writing an autobiography, and working on a new album. Luckily, he had enough completed tracks to put together the posthumous and final studio album, Deeper Still, which was released earlier this year. The album includes some classic Rick James funk, some introspective tunes, and a cover – Crosby, Stills, and Nash’s “Guinnevere”. While it may look strange at first glance, there’s a connection there. What do CS&N and Rick James have in common? Many of you know the answer already. It’s Neil Young.

In the mid 60’s, When his musical ambitions outweighed his desire to fulfill his duty in the U.S. Naval Reserves, Rick left his hometown of Buffalo, NY, and went AWOL. He was off to Toronto with the stage name Ricky Matthews to pursue a career in music. It was there he formed a band called the Mynah Birds, which would soon enough add Neil Young as a member. The Mynah Birds ended up recording one album with Motown. The whole thing blew up when their manager pocketed the label’s advance money. The manager was fired, and in turn notified the authorities of Rick’s AWOL status. The album was shelved, and Rick spent a year in the Brooklyn Brig.

He moved to L.A. in 1969. During his eight years there, one of the bands he was involved in was Great White Cane. You can hear the song “Mother Earth”, with Rick on vocals, below.

It was 1978, with his debut Motown album Come Get It!, when the Rick James we all know emerged. The breakout single was the eight minute “You and I”. The album also included his ode to the green: “Mary Jane”. From there, it was smooth sailing for the next 10 years or so, as Rick busted out the hits on Motown. His peak came of course with “Superfreak”, from 1981’s Street Songs.

His dark years with cocaine abuse and legal problems are well documented. And of course, the Chappelle Show turned him into a cult hero for a new generation with the “I’m Rick James, bitch!” sketches. But it all comes back to the music. Rick James’ run on Motown in the late 70’s and throughout the 80’s was full of some classic funk jams and tender R&B ballads. We can forget his involvement in producing Eddie Murphy’s “Party All the Time” though, can’t we??

Amy Winehouse steps out at the Mercury Awards