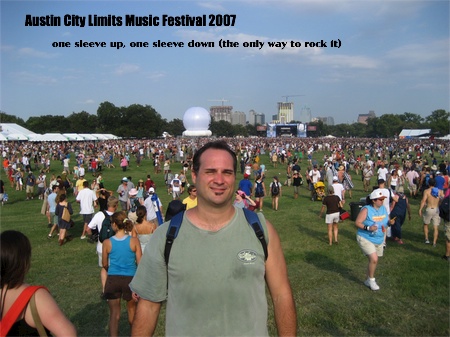 Well I’m back in the desert after a nice long, hot, exhausting, and thoroughly exhilarating weekend at the Austin City Limits Music Festival. Crikey, do those folks at ACL know how to put on a festival… seven stages scattered throughout Zilker Park – an immense city park that accommodated 65,000 (!) of us each of the three days. The army of shuttle buses from downtown Austin to the park was a godsend – when we figured it out on the third day. For those who are curious, it takes an hour and 10 minutes to walk from Zilker Park, across Town Lake, and down Cesar Chavez Blvd. to downtown. I know from experience. Thanks to the Lavaca Street Bar for serving as a veritable oasis to me and my brother – two very sweaty & weary customers who emerged from the hot and humid Austin night. Your pitchers of Dos Equis are to be commended. Well played.

With 130 acts playing over the span of three days, it was impossible to see every act I wanted to see. Unfortunately, I missed Damien Rice, Stephen Marley, and Joss Stone – to name a few. But here’s who we did get to see over the three days.

I’ll spend some time focusing on each day over the next few posts, but here are some highlights…

BEST IN SHOW: The Arcade Fire – Win Butler and his band of crazed gypsies killed on Saturday night. Since discovering them a couple years ago, they are the one band I’ve been dying to see live. And they lived up to my high expectations. The moment for me was the emotional anti-war “Intervention“, which he dedicated to “Governor Bush”. The studio version gives me the chills every time as it is. But live, it’s taken to another level. The encore, “Wake Up”, was an amazing crowd experience, as everyone sang along to the epic “OOOOOWOOOOOO”s. It was a high energy assault on the senses, and for me, one of the best live music experiences of my life.

MIGHTY NICE TO MEET YA, v. 1: After Steve Earle’s hour long set (with his quite fetching wife Alison Moorer joining in for a couple), he headed over to the Waterloo Records tent to sign some CD’s. My brother, camera in hand, came through with what will be a prized possession of mine: me and Mr. Earle! 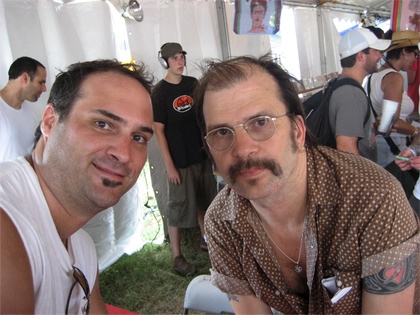 Steve has shaved off his long, grizzly beard that he wore for his role on The Wire, and he’s looking like one bad-ass mofo these days. I remember not too long ago that he would have been the one with the double chin. Oh how the tables have turned! (dammit Pete, no more ice cream for you!… but that Ben & Jerry’s Willie Nelson Peach Cobbler is so Good! …NO!!).

MIGHTY NICE TO MEET YA, v. 2: I had a chance to meet up with the mighty Ace Cowboy over at Hidden Track. We caught some Beausoleil, Arctic Monkeys, and Arcade Fire together (or Arcade Monkeys as we came to call them). Ace has some detailed ACL posts up. He was dedicated enough to post from the road. My lazy ass left the laptop at home. Nice to meet a fellow blogga.

More details will emerge this week. For now, I rest!