With the cancellation of the White Stripes, Saturday’s headliner, many called this the weakest day of the festival lineup-wise. But for me, it turned out to be my favorite. Here’s why:

Raul Malo – What can be said about Raul Malo, other than he has the voice from the heavens and could sing the phone book and it would sound great. The former singer for the Mavericks kicked off the early afternoon with a fantastic set at the Dell stage, peppering in Mavericks classics like the barnburner “All You Ever Do Is Bring Me Down” and “Dance the Night Away”, with the steamy Latin love song “Besame Mucho”, a cover of Dwight Yoakam’s “It Only Hurts Me When I Cry”, and the mambo classic “Sway”. 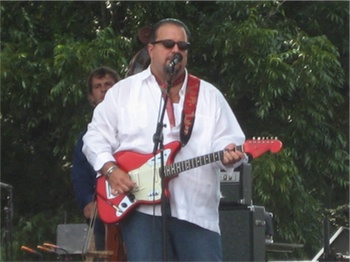 One of the great things about seeing Raul Malo live is his sunny disposition. The guy seems to always be in a great mood on stage, and it’s rare not to see that beaming smile throughout his set. He has a way of putting the audience in a good place, and that good nature comes through in his music. Dammit I feel all warm and fuzzy just talking about it.

Here’s some sweet vid I shot of Raul and band doing “All You Ever Do Is Bring Me Down”:

Watch an interview of Raul at the ACL festival.

Steve Earle – Having been tuned into Steve Earle’s new album with Dust Brother producer John King, I wasn’t surprised to see a couple of mic stands and a DJ rig set up for Steve’s ACL set. But it was a sight that probably made a few people go “hmmm.” The first few songs were just Steve and his gee-tars. He walked out and told his Townes Van Zandt / Amigo the Horse / Crested Butte story that prefaced Townes’ “Rex’s Blues” into “Fort Worth Blues”. Then he reached back to “Tom Ames Prayer”, “Rich Man’s War”, and “Copperhead Road”. 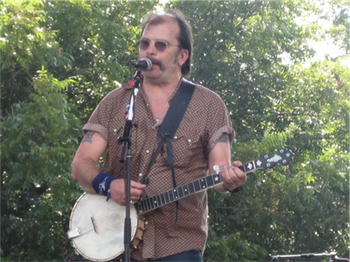 THEN, up crept DJ Neil, who laid down a funky lil’ beat which led into “Tennessee Blues”. I was front and center, and I heard some laughter and sounds of surprise from a lot of the crowd as they tried to comprehend what they were seeing: not Steve Earle & the Dukes, or Steve Earle solo, or Steve and the Del McCoury Band, but Steve Earle and a DJ. Two turntables and an acoustic guitar? Damn straight! 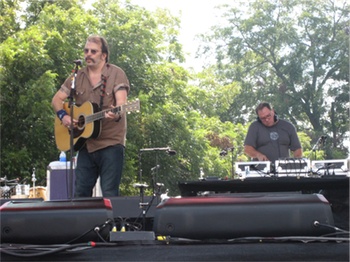 (out September 25th). He played 8 of the 12 songs from the album. His wife Alison Moorer came out for a few songs (“Down Here Below”, “City of Immigrants”, and “Days Aren’t Long Enough”), looking radiant in green… 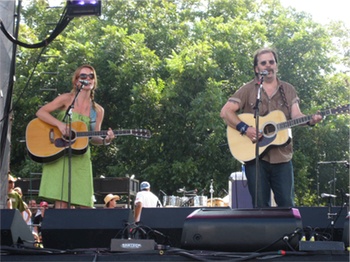 When the set ended, and we were shuffling off to the next stage, I overheard a young lady say “That was weird.” I don’t think she meant it in a good way. For me, it’s the weirdness and unpredictability that attracts me to artists like Steve Earle, and I know a lot of people agreed with me on that day. It’s the courage to try something new, instead of sticking with the same formula. The same courage that inspired Bruce to release Tunnel of Love after Born in the U.S.A. (or head off on tour with the Seeger Sessions Band), or Prince to follow Purple Rain with Around the World in a Day. It may shake off some fans, but those of us who are interested in following artists along on their journey – wherever they may go – are in for a thrill.

Steve Earle carries himself like he’s sporting a perpetual middle finger to “what’s expected” of someone. Watching him strum along with the manufactured beats and samples of the DJ certainly was different than my past Steve Earle experiences, but was a lot of fun to watch. I caught a couple of moments where Steve and DJ Neil were interacting, and you could sense genuine happiness on Steve’s face – the joy of kicking down the walls and trying something completely new. Keep on going, Steve – I’ll be following along.

Beausoleil – I regret not being better positioned for the Beausoleil set. We were off to the side, just far enough to miss out on the full Beausoleil experience. But we treated to some great traditional Cajun sounds, with leader Michael Doucet’s great voice and fiddle playing. I need to see them when they pass through Phoenix, but like a lot of the bands and artists I admire, Phoenix isn’t part of the tour itinerary. I think I need to be a promoter and pull in some of these acts. No Wilco? No Arcade Fire? No Beausoleil? And I could go on and on. I guess it has to do with the local radio market too, which is saturated with your run of the mill country, classic rock, “lite” jazz, and talk stations. And people are satisfied with this? Blechh… sometimes I feel like I live in a town with no fucking soul. I guess I feel especially sensitive to this right now because I just returned from Austin. But it’s always there. Of course, I’ve chosen to live out in suburbia in the land of cookie cutter houses, SUV’s, everybody and their uncle on their damn cell phones all the time (talking to their little bluetooth headsets), no sense of community. Did I say blechh? Let me say it again: blechh.

Arctic Monkeys – These Brits are a favorite of the music critics out there, and there are a lot of devoted fans – probably a lot of you – but they didn’t click with me. I can appreciate and admire the energy and creativity with their Brit-pop-rock-punk stylings, but I need a melody. I wasn’t hearing one. Not that they’re pitted against each other, but gimme Kaiser Chiefs!

Arcade Fire – Many people have asked about who I enjoyed most at ACL. “Arcade Fire” is my answer. It’s often followed by “Arcade who?” or “What kind of music do they play?”. I never know how to answer the “what kind of music” question. That’s why I struggle with reviewing records. It seems in order to write an accurate review, you have to pigeonhole artists into categories. I’m guilty of it by lumping every post of mine into genre categories. But I hate to define music. It’s so subjective. And people like me who appreciate every kind of music under the sun have a hard time putting it to words. “What kind of music do you listen to, Pete?” – Um, everything?

So how to answer the Arcade Fire question? I try with words like gypsy rock, high energy, Montreal, indie, Epic (with a capital E)…. does that do it justice? No. For one person, I pulled out my iPod and had her listen to “Intervention”. That’s Arcade Fire.

Ever since I first heard “Old Flame” about three years ago, I’ve chomped at the bit to see Arcade Fire live. Win Butler’s amazing vocals and the unique instrumentation promised for a great live experience. And great it was. We weren’t too far from the stage at all – a little to the front and left of the soundboard. We were in a sea of people with not too much room to move (my bro wasn’t too fond of the sixty-something, writhing hippie with an affinity for pouring water on his head to cool off). But when the music started, it turned into an intimate, communal experience.

They’re a seven piece ensemble. And they’re not the reserved bunch. Richard Parry flails around like a wild banshee, banging drums, crashing cymbals, and I think I saw him hitting a motorcycle helmet with wild abandon. Régine Chassagne, Win’s wife, played some wild looking instrument with a crank, played keyboards, played drums, and acted out lyrics at different times. Holding them all together is Win Butler. There’s something about the guy. I don’t know, some sort of wise and spiritual aura. Whatever it is, I can’t get enough of his voice.

My highlight was “Intervention”, which has to be my favorite song of the year. Goosebumps.

And the communal craziness of their encore, “Wake Up”, is evident here:

But enough of my yakkin’, you can download the show here.

Thanks to the boys at Hidden Track for hipping me to the ACL Downloads Page at Largehearted Boy .