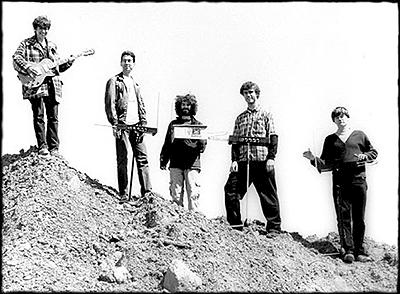 And now for something completely different. I first found out about the Lothars when I listened to The Sandinista Project: A Tribute to the Clash. Their version of “The Call Up” was up there among the strangest of the bunch (a good strange, of course).

The Lothars are a theremin-based band. They’re made up three theremins, and accompanying instruments like “homemade electronics”, a hammered dulcimer, a violin, a guitar, and a log drum. They’re from the Boston area, and have been mystifying their friends and fans since 1996.

We’ve all heard of theremins, but do we really know what they are? Quick lesson… the instrument was invented in 1919 by Russian inventor Léon Theremin (that’s ol’ Léon down there). A theremin consists of two pitch and one volume radio frequency oscillators and two metal antennas. To play it, the hands are moved around the two metal antennas, which control the instrument’s pitch and volume.

The resulting sound has an other-worldly quality to it. I snuck in a listen of Meet the Lothars (their first album) at work last week. By the time it was finished, I thought my co-workers were going to peel their faces off, the lights were going to dim, a UFO would descend outside the window behind me. and we would all levitate slowly into the craft. Eh, maybe it was the mushrooms. *

And I was just getting into it again now, but my cat Jéfe is getting a little freaked – wondering what all these strange noises are – so I have to switch to something else.

Now, watch the Lothars in action…..