I have to say, the Led Zeppelin reunion has me all geeked up. As someone who was all of 10 years old when they decided to call it quits after Bonzo’s death, count me in on the side that hopes they do tour (especially after hearing the rave reviews from Monday’s O2 Arena show).

I read Lefsetz’s thoughts on the rumored tour, and while I understand how he doesn’t want Zeppelin to fall into that category of mega-corporate-money-making-reunion-machine, at the expense of people’s memories of Led Zeppelin in their prime – I would like to see these legends together in front of me. I know it can never be the true Zep without Bonzo, but this will just have to do, ya? 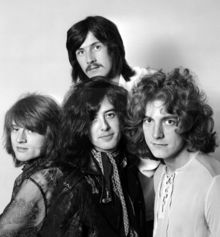 So I got my grubby hands on this great 1969 French radio broadcast. The lads had descended on Paris during their tour supporting Led Zeppelin I

(listen to Plant introduce the “new” song “Heartbreaker”, from II). I had never listened to a Zeppelin show this far back. It’s a fascinating and wholly satisfying document of a legendary young band with so much ahead of them – so much groundbreaking music in store for us. The French broadcaster likes to hear himself talk, even mid song at one point – but it’s brief and isn’t much of an annoyance at all.

I didn’t discover Led Zeppelin until 1987, during my senior year of high school. The great thing about timeless music like Zeppelin is that there’ll always be a 17-year old somewhere discovering their music. As long as there are living, breathing human beings with ears and the means to play music, the Hammer of the Gods shall live for eternity! Mwaahahahahaha! Ahem.

Ain't Too Proud to Beg

Afrofunk falls into a Deep Sleep