Mayer leaves the paparazzi behind and delivers a heartfelt set to his hometown crowd. 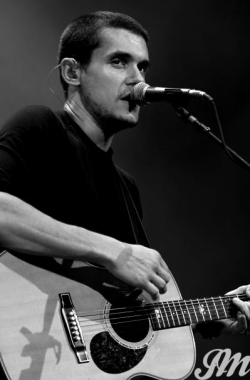 “Here are the delays and cancellations of your problems…” promised an earnest John Mayer Saturday night, and for the two hours he occupied the stage, he delivered just that. He quietly walked onstage and kicked straight into his Continuum heavy set with a humble determination that shined though every note. And while his crowd may have proved quite lame (seriously, who sits for an entire show and texts for three quarters of it?) he delivered a solid and energetic show that will stick with me for quite some time.

Mayer kicked off the set with the mid-tempo burner “Belief” into the soulful “Vultures”. A quick guitar change later (seriously, the guy rolls with an obscene amount of gear) brought the first cover of the evening in the form of Robert Johnson/Cream‘s classic “Crossroads” which had a decidedly funky twist to it. This was also the first opportunity that he took to let his guitar playing take the center stage. And say what you want about his pop-leanings and celebrity persona, Mayer knows how to throw down and can hang with the best of them.

“I can’t tell you how happy I am tonight. There’s nothing like coming back home to play a show” was his first spoken words to the crowd (at about 20 minutes into the show, no less) and it was clear that he was feeling the love and enjoying playing for family, friends and fans alike. The pairing of “I Don’t Trust Myself (With Loving You)” and “Dreaming With a Broken Heart” lead my wife to the observation that he really does put the “Bad Boyfriend Material” warning out there.

The acoustic portion of the set featured a heartfelt dedication to his parents (who were in attendance) and the second and third covers of the evening in the form of Tom Petty‘s “Free Falling” followed by an absolutely sick 12-bar blues based take on Duffy‘s “Mercy”. Why it is that despite having a fairly decent amount of his own material he chooses to play covers is beyond me, but the crowd certainly ate it up.

From here Mayer sailed through a pair of early hits lamenting “you can only really play one place where you’re singing “I wanna run through the halls of my high school” and you guys know where that high school is”, leading up to the set closer “Gravity”. This was actually the second time that I got to hear this performed (the first being with the John Mayer Trio) and it still carries the power that it did then (and you can hear for yourself at the end of this post). The encore (which was chosen by the fans via his website) wrapped with his current single “Say” at which point my wife and I decided to trek back to the car.

If you’ve not experienced John Mayer live I can heartily recommend checking him out when he swings through town.

In Repair
Waiting on the World to Change
Say

Buy Where the Light Is: John Mayer Live in Los Angeles: Amazon | iTunes