When Travis comes to town, it’s always a special show. The previous four times I have seen them have all been very entertaining. The first time was as a warm up to Oasis in 2000. Next was headline at the now defunct Glam Slam later that year. Then we had the big show at the State Theater in which the audience was invited up on stage to dance…the entire audience! Two years ago was the infamous 1st Avenue show in which the theme from Rocky was played at the opening as the lads ran in from the front door and through the crowd (!) to get to the stage.  Fran, Dougie, Andy, and Neil are terribly charming and wonderfully fun to see live, so when I saw they were coming to the intimate setting of the Fine Line in downtown Minneapolis, I was quite amped. 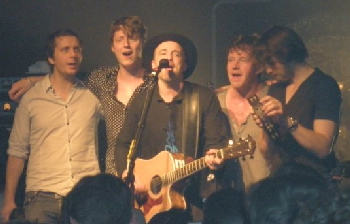 Their new album, Ode to J Smith, has a much heavier sound than their previous five records. It’s nice to see them moving beyond their dream pop/Radioheadesque shoe gazing meme (which, of course, I love since I am a card carrying member of Emo Shoe Gazers Inc) and really evolving as a band. As they took the stage around 10pm last Saturday night, teasing us with the first bit of the soft “Three Times and You Lose” and then cutting right into “Chinese Blues” from J Smith,  it was abundantly clear that they had been enjoying their stay in Heavyosity, USA.

Playing songs from each of their six albums (and returning several times to that dream pop sound), Travis wowed and charmed the crowd with their witty banter and highly interactive performance. During “Falling Down,” lead singer Fran Healey came down into the audience to slow dance with a lass and sing amongst us sweaty ones. Not to be outdone, lead guitarist Andy Dunlap left the stage and went into the alley outside for a solo! It was fun to watch the guitar tech try to get the chord for his Les Paul to give as much slack as it could. At one point, I though he might make it all the way to First Avenue.

Highlights for me were “All I Wanna Do Is Rock” (played with balls to labia ferocity)…”Driftwood” (which, after 10 years, I finally truly understand since someone in my life has become the living example of this song)…”Turn” (with Dougie taking the second verse as usual and always a treat) and a bonus, Minneapolis only “Flowers in The Window” played in unplugged style as the very last song.

They are playing dates out East for the remainder of the tour…Cleveland, Toronto, Washington, Philly, New York and Boston….and it looks to be all more intimate venues….a rare treat for yet another UK band that sells out 10K + venues across the pond. Check them out and don’t forget to stare dreamily at your trainers. 🙂

Check out Ode to J. Smith

Leonard Cohen Giveaway: The Winner is...