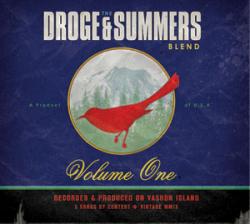 Pete Droge just added Volume One, a new EP by The Droge & Summers Blend, to his Puzzle Tree Online Store today. The EP is made up of 5 tracks, and you – the picky music consumer – have the option of paying what you want, a la Radiohead’s In Rainbows. I just picked up the digital download for the default price of $2.99, and they are well worth it. Head over to Pete’s store to listen to the tracks and download if you fancy. The EP is officially released later this month.

The Summers in The Droge & Summers Blend refers to Elaine Summers, a Seattle area musician and artist who shares the vocals with Pete. They recorded the songs on nearby Vashon Island.

I’ve been a fan of Pete’s since his debut, the Brendan O’Brien-produced Necktie Second, back in 1994. There’s just something about his vibe – relaxed, genuine, gentle – that has always sat quite well with me.

Here’s one of the tracks – a happy-go-lucky, summery kind of tune…