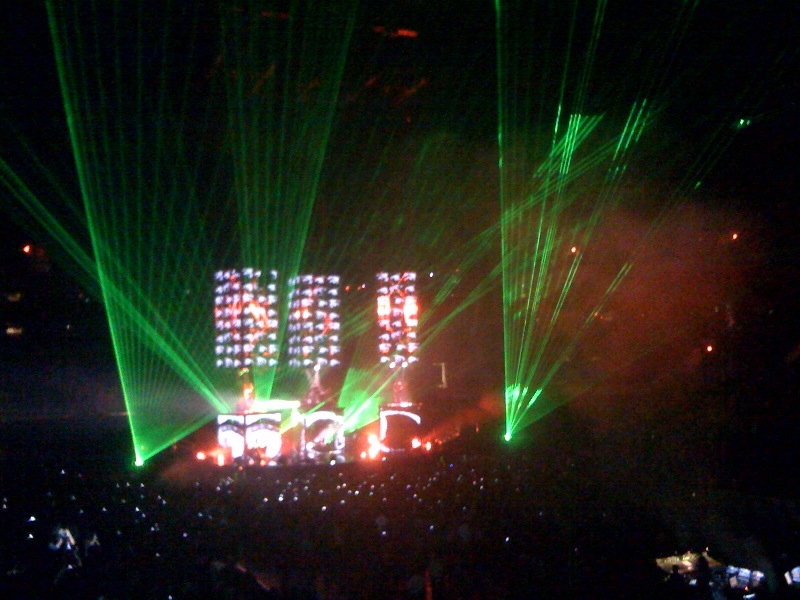 Whoever is responsible for the lighting, laser, and multi-video screen spectacle that accompanies Muse‘s live stage show should be showered with awards. Last night’s show at US Airways Arena was something to behold – a complete frontal assault on the senses.

I was asked by an old friend a few weeks ago if I had any interest in going to see Muse, with openers the Silversun Pickups. Not knowing a whole lot about either band, but having heard here and there of Muse’s incredible live show, I said “why not” and accepted.

“Uprising”, of course, hit my radar a few months ago, and I loved it immediately. I’ll take an anthemic blast of a tune like that any old day of the week – and that’s the best one of its kind I’ve heard in years. So when the lights went out in the arena, three giant skyscrapers lit up, a draping fabric fell from the top down, revealing the English trio on tall, elevated risers (making up the bottom quarter of the skyscrapers) – and the opening pulses of “Uprising” kicked in – I knew I’d come to the right place.

At first glance, guitarist/lead vocalist Matthew Bellamy – diminutive and not the “handsome” rock star type – wouldn’t strike one as the quintessential frontman. But strap a guitar on that man, listen to him sing and work a stage – and you’d be hard pressed to find a better performer. Bellamy’s voice soars – from a lower register to a beautiful falsetto – and it was apparent throughout the show why the band is mentioned in the same breath as Queen. Soaring, epic songs like the closer, “Knights of Cydonia” illustrated this quite well. Sort of like super-electro-21st-century Queen.

Bellamy also showed off his piano chops for “Feeling Good” (made popular by Nina Simone). And right up my alley, he channeled his inner Prince in the super-funky “Supermassive Black Hole”.

He had the arena in the palms of his hands with the crowd favorite “Starlight” – the whole crowd clapping in rhythm and singing along.

But I’d be remiss not to mention bass player Christopher Wolstenholme and drummer Dominic Howard – the tight rhythm section that have rounded out this power trio since their inception in the 90’s. The coolest moment with these two was midway through the show, when Wolstenholme stepped on to the drum riser behind Howard – which proceeded to elevate 20 feet in the air while they rotated around – and they tore into 3 minute bass and drum jam, complemented of course by a light show that added to the intensity and thrill, and which ended when the riser descended again to stage level.

The stage effects are a huge part of Muse’s show. They can almost be considered a fourth member of the band, they play such an important role. Throughout the show, the three giant columns that started off the show as skyscrapers, turned into a mind-blowing series of projected videos – psychedelics, dreamscapes, and some amazing live shots of the band. The accompanying light show was incredible as well. 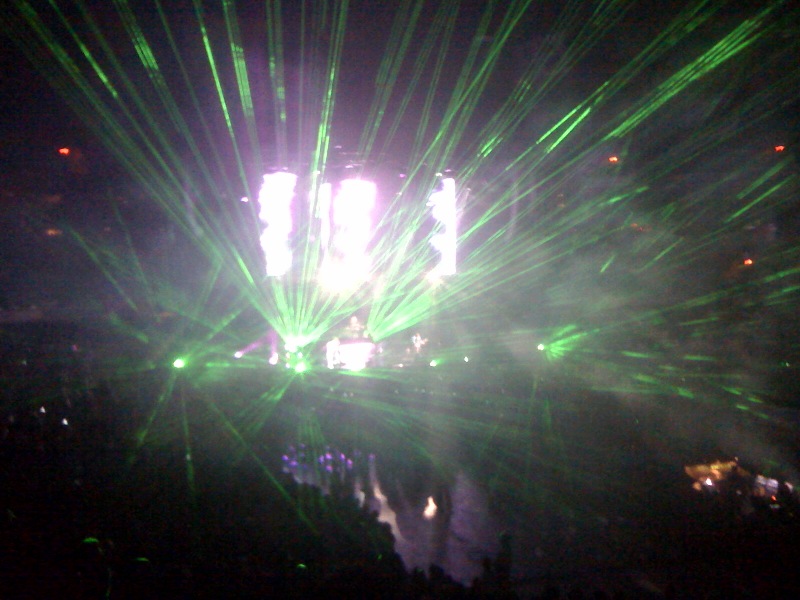 And then there were the green lasers. They first made an appearance a few songs into the set during “New Born”. I can’t think of a more intense visual experience than what I witnessed during this song. The two subpar iPhone pics I included here were taken during the song, and don’t it justice in any way. I didn’t realize it until about halfway through, but I was grinning ear to ear as I watched these shards, patterns and lines of green light dance around the arena. I spotted who I think was the lighting tech shortly after the song. Standing at a console 10 feet behind the soundboard, headphones on and head bobbing, he manipulated the controls to the rhythm, clearly having fun while doing his job, and every part a member of the band as the three on stage.

I see what the fuss is about – and I’m glad I left my live show comfort zone to go check out something new. Muse has a new fan in me. As do the Silversun Pickups, whose 40 minute opening set showcased their distortion-driven indie rock.

Muse’s US Tour wraps up next weekend with a performance at Coachella. Then it’s off to Europe. The next time they come around my neck of the woods, you’ll find me there. And I’m dragging everyone I know.