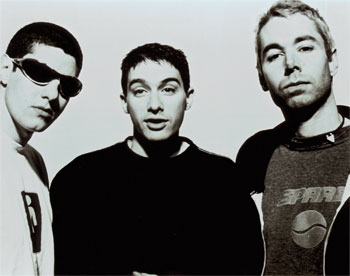 The Mix Up: The new Beastie Boys album, The Mix Up, should be available to the masses in June, according to a recent interview between Mike D. and NME.com. The album is said to harken back to the sound of Paul’s Boutique (1989) and Check Your Head (1992), which I find to be great news (“B-Boy Bouillabaisse”, anyone?). Could be that I’m just nostalgic for that era in hip-hop, being an increasingly alienated older fart, who knows…

I love cool song names, and this track listing has ’em…

Be For My Name
14th St. Break
Suco De Tangerina
The Gala Event
Electric Worm
Freaky Hijiki
Off The Grid
The Rat Cage
The Melee
Dramastically Different
The Cousin Of Death
The Kangaroo Rat

Update: and then Stereogum comes out with this, completely contradicting the article above…

“This time out the trio are sticking solely to their instruments”

“Mike D told P4K that it’ll be nothing like The In Sounds From Way Out!, instead drawing on the likes of PiL, the Killing Joke, the Slits, and Gang Of Four for inspiration.”

Critical Metrics: A reader buddy of mine sent along a cool article from the Wall Street Journal profiling Critical Metrics, a brand new music aggregator site that ranks songs based on recent reviews in magazines, web sites, and yes, blogs. It’s sort of similar to Elbo and the Hype Machine, but a different look and feel. Quite cool. Go take a look. We’ll see how long it takes for Ickmusic to be added to their “Recommendation Sources” section.